The secret ingredient to a scary commercial.

When making a scary commercial, the ingredients for success may seem obvious.

You need a client who actually wants to scare people. (You really need to double check this.)  A director and crew who can produce a bucket of “fake” blood suspiciously fast. And actors who are okay with wearing a filthy pig costume for a couple hours.

But this year I learned there’s one more element that can make a huge difference: soy sauce.

I discovered this secret ingredient while scouting locations for a series of spots for Knott’s Scary Farm, the annual Halloween event at Knott’s Berry Farm.

We needed a location that felt like a deranged clown already lived there. For the layman that means having:

There was only one place that had it all: An old soy sauce factory on the south side of Chicago. We walked in and start complimenting the art department for all their work and then someone told us all they’d done so far was sweep up all the soy sauce packets that were left on the ground.

So, while those packets never show up in the commercial, I think you can feel them lurking in the background, locked in that old building for years, wondering if anyone will come to dip something into them. If soy sauce was capable being driven mad, it would’ve happened there.

The atmosphere was so perfect that it helped create exactly what we were looking for: three commercials that I can never, ever show my children. In fact, the guy who owned the place was so impressed that he wanted us to leave all the set decorations, so it will probably be next year. You should go visit. But be careful, don’t step on any lingering soy sauce packets. 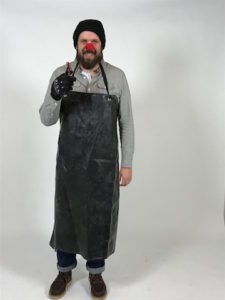 Above: Tom Katers in his creepy copywriter costume. (He did not write the caption for this photo.)