ConneCKtions Research Study: Crunch time and what it means for marketers.

By Dave Brazier and Lisa Rios

There aren’t enough hours in the day. We’re racing against time. There’s even a self-help book (billed as “mercifully short”) that promises to help people escape “Crazy Busy” status. We’ve heard it and said it so many times in meeting rooms, on phone calls and even in creative briefs (gasp!) that this state of mass business has become marketing wallpaper.

In social venues, the time crunch humblebrag has become so pervasive it’s spawned an evil corollary—the “too much free time” put down.

C-K wanted to know: How time crunched are we really?

Is it true that all American adults are at or near a breaking point when it comes to managing our time? To find out, we took to the streets internet to understand this phenomenon and who is behind it. 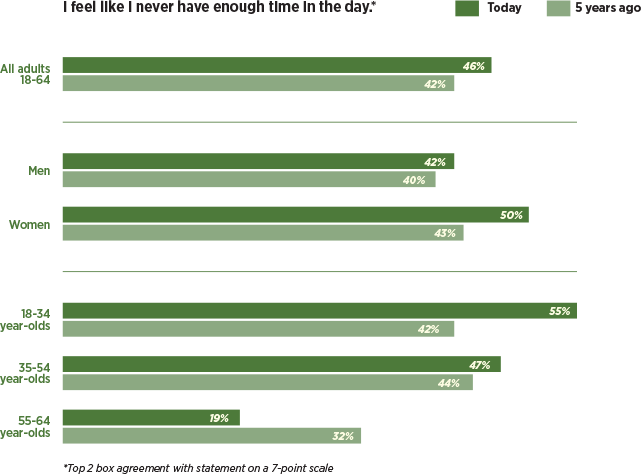 Who is driving the perception?

The short answer? Millennials and Women.

Presumably because they’re growing into “adult” responsibilities and schedules, Millennials (adults aged 18-34) report being more time crunched than other age cohorts. Fully 55% agree with the statement “I feel like I never have enough time in the day.” And looking back to 5 years ago, they say that feeling has increased significantly. On the opposite end of the spectrum, adults over 55 feel relatively less pressured—and less time pressured than they felt 5 years ago.

Women also report a struggle to beat the clock—and they say it’s gotten worse over the past 5 years. Relatively, speaking, men aren’t feeling the heat as strongly—nor has their time crunch worsened.

Are some times of the day worse than others?

Men report feeling a consistent level of pressure from the morning until around 8 in the evening, at which point it eases off. Women also feel the crunch all day long – and they say it intensifies after 2:00 through the evening. Relief comes at bedtime… and the cycle begins again the next day.

Opening the pressure valve: How would US adults spend a surprise day off?

Given a day off free from their normal responsibilities, most adults would prefer to spend that day doing very little: Both men and women put catching up on TV and doing nothing at the top of their day off (not) to-do lists.

Women would push this day of leisure even further—by napping, getting a massage, sitting in the sun or reading a book. Many men, in contrast, look to disengage through physical activities like taking a walk/run, playing videogames, going to the gym or going for a bike ride. 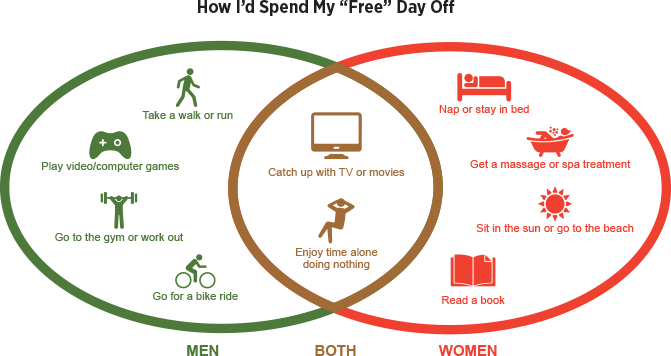 Help Millennials win the race against time. As they finish school, enter the working world and start families, Millennials are feeling more time-crunched than others – and increasingly so. Alleviate some of the pressure by providing tips, tools and applications that help them manage their time. Make transactions with them as quick and simple as possible.

But recognize that faster is not always better. While younger consumers appreciate a one-click mentality, older consumers may wonder what the rush is all about. Pace engagements to your consumers’ life stage, being sure to slow down your communications with your audience 55+. And understand that tech-based solutions designed to save time and keep people connected may not be worth the money to older audiences.

Help women get to their “me time.” Though some studies suggest that household responsibilities are being shared more equally, the movement hasn’t caught up with most of the women we surveyed. In the late afternoon and early evening hours, a woman’s time is not her own. Show her that you “get” her time crunch anxieties, and help her manage her time more efficiently. When she does find that much-needed break in her day, you can help her recharge by “tuning out” and disengaging in ways big and small.

The “Time Pressure and Kicking Back” survey is a part of a C-K Milwaukee research series about how people spend their free time—and what that means marketers. The national survey was fielded among more than 1000 men and women age 18+.