Remember that scene in The Breakfast Club where Allison Reynolds dumps the contents of her purse onto the bench at the library, revealing to Andrew and Brian all the stuff she carries around every day? We recently asked hundreds of American women to do that same thing—albeit virtually—in a national survey about the purses women carry.

Turns out that even in the digital age, more is more. American women are toting a vast, plentiful bunch of stuff, and they are choosing their bags accordingly.

It may be that Allison’s 1985 logic is evergreen: “You never know when you might have to jam.”

The Rule of T

Breaking down the items that most women carry, we noticed that “must have” purse items tend to fall into 3 categories: Transaction, Technology and Transition. 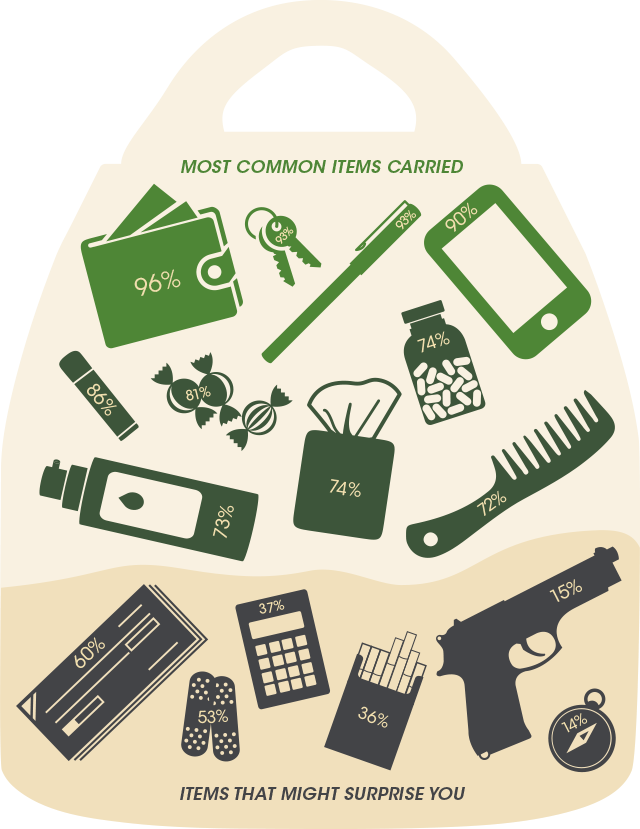 Think of transaction items as the tools she needs to buy things, access places and interact – like her money and wallet, keys and a pen or pencil. When we say Technology, that’s shorthand for the all-important Smart phone, but it also includes secondary gadgets like digital tablets and e-readers. Transition items help take her from one environment to the next, including lip balm, gum/mints/candy, tissues, lotion and a brush or comb – personal effects that have traditionally found a place in women’s handbags.

Less common, but well-represented in women’s purses are items that reveal a number of contradictions: In an age when 90% of women are carrying smart phones, 37% are still carrying a separate calculator they’ve (apparently) grown attached to. There may be an app for that, but 14% of women report packing a compass. And although only 15% of women report smoking cigarettes (CDC, 2013), a third of the women we surveyed revealed that they carry cigarettes or e-cigs in their purses. (Perhaps they’re holding them for a friend?)

The Burden of Technology 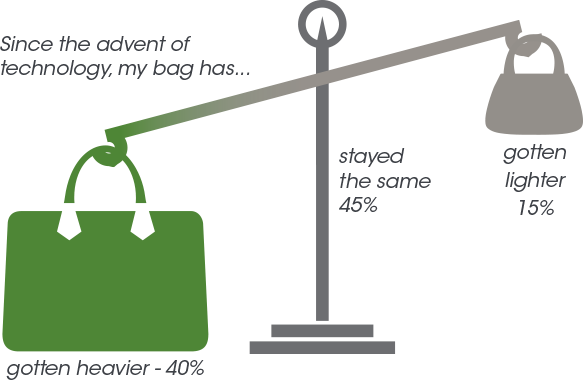 While many of us like to think that technology brings efficiency, the truth is that technology has not lightened women’s loads. 85% of women report that the purse they carry is just as heavy or heavier than it was before the advent of smart phone technology. Modern day Swiss Army Knife? Not so much. 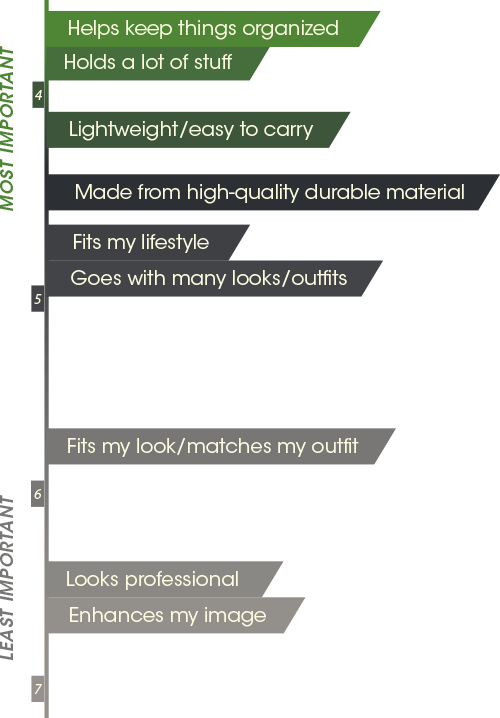 Perhaps not surprisingly, the top three characteristics she looks for in a purse all deliver on her desire to carry and organize more things, statistically trumping fashion and image enhancement. 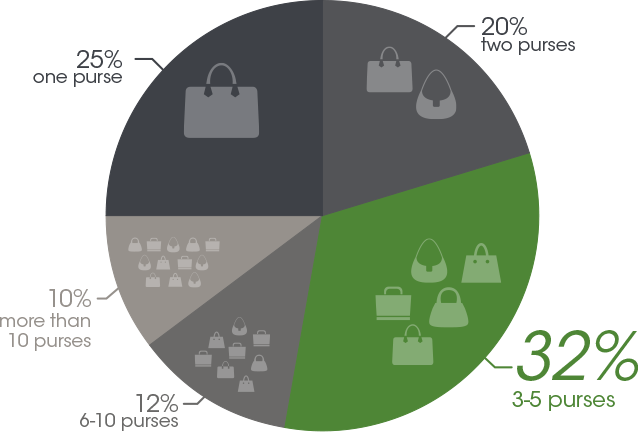 Before we understate the importance of style, it’s important that we look at all the numbers. Fact is that the vast majority – three quarters—of women report having more than one “active” handbag at any given time. So if a certain purse isn’t quite right for a certain outfit, special occasion or the weather outside, she will simply switch it up.

What does this mean for marketers?

Behold the Rule of T. If your brand or product isn’t adding value in terms of transaction, technology or transition, it could get relegated to a less important bag—or completely left behind.

Understand her secret self. Handbags are a land of contradiction and comforts. Don’t believe everything you hear about dead technology or health trends, because there may be an alternate (and truer) reality just inside the zipper pocket.

Organize me, please. Brands and products that keep important tools and information within easy reach will continue to find a role in their purses as well as their lives.

Embrace the Switcheroo. Every time a woman migrates her things from one handbag to another, she’s making judgement calls about her future needs and the items that will best deliver on them. There may be opportunities to engage women during those windows when switching is most likely to happen – like changes in season (spring purse cleaning, anyone?), back-to-school time and prior to major holidays.

The “What’s in Her Handbag” survey is a part of a C-K Milwaukee research series about the stuff people carry around with them—and what that means to marketers. The survey was fielded among 611 U.S. women 18+ who regularly carry a purse or other bag. Surveys were completed online in March 2015.