By Annie Cassel and Melissa Severin

While native advertising and product placement rule the day, brands still enter the pop-culture ether organically. Case in point: Last week Jerry Seinfeld’s Comedians in Cars Getting Coffee featured a short episode called “Passing Ketchup.” It’s comprised of outtakes from Jerry’s conversations with several comedians and it just so happens that Heinz Ketchup was often on restaurant tables and became a humorous part of the conversations. For brands, naturally appearing in movies, cultural commentary and television shows with cult-like following provides a subtle nod of acknowledgment. In today’s world, it’s that type of acknowledgment that often gives us big and small opportunities to share a moment and have fun with fans and customers. 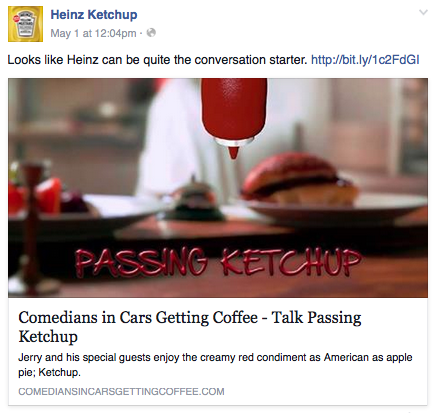 Similarly, sometimes the brand’s entire advertisement finds its way into entertainment media. Not only can our clients’ products be found throughout various forms of media (Corona was apparently the beer of choice for our favorite doctors and nurses on Scrubs), but specifically, advertisements created by C-K have also reached iconic status—they have served as touchstones for authors and comedians, as well as reference points in major television shows and movies.

For our special #TBT blog edition, here are a few times C-K’s client work has made cameo appearances in the zeitgeist:

The commercial highlights a man acting foolishly as he watches various women on the beach while a woman, presumably his partner, sits beside him. The spoofs take that idiocy a step further, with Jimmy Fallon’s character and Peter both becoming inebriated enough to pass out and injure themselves or others, while their female counterparts call them out on their poor judgment – much as the woman in the original commercial does. This memorable commercial was so popular that it was also satirized by Leno and The Onion.

Smith dives into the deeper meaning behind the renowned Corona advertisement tagline, “Find your beach.” She pulls out a variety of different perspectives from which one can read that tagline, depending on state of mind, where one lives, how happiness can be measured, and so on. What began as an assessment of the giant advertisement outside her window transforms into an ode to Brooklyn, where she has ultimately found her personal beach.

The Rozerem commercial shows a man’s conversation with his dream characters as he struggles with stress-related insomnia due to his job. A.J. (Tony Soprano’s son) watches the commercial in its entirety after (#spoiler) a botched suicide attempt.

The unforgettable ‘90s “big head” commercials C-K created for Steve Madden shoes found their way back into the spotlight as the Wolf of Wall Street movie hit theaters across the country. The movie acknowledged and reminded viewers of how iconic these commercials became during the height of the Steve Madden shoe reign.

These moments of C-K work in pop culture are testaments to the power of branding. Iconic or ubiquitous advertisements can be classics, or they can act as a marker for specific time period or cultural feeling. By becoming embedded in the era’s culture, these ads then became tools of commentary for the artists using them.